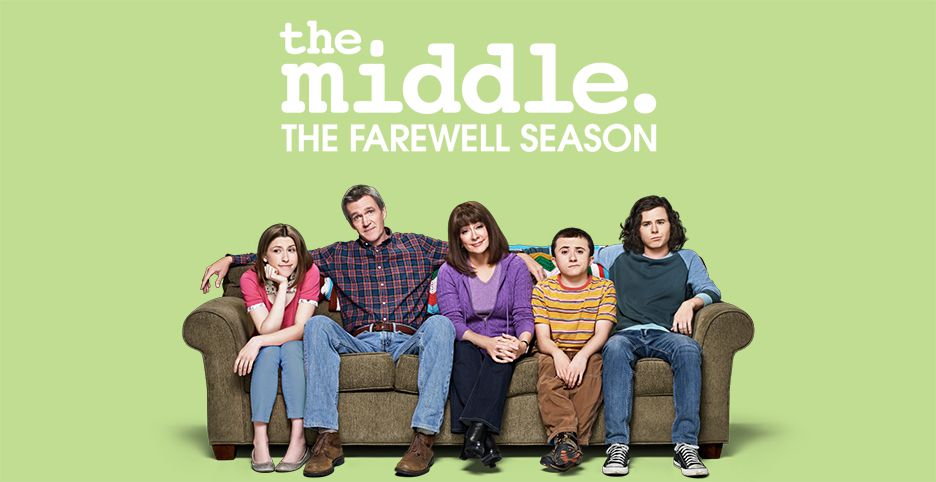 See the status box below for the most up to date return date info for Season 10 of The Middle:

The Middle SEASON 10 Cancelled By ABC

Don’t miss the release of The Middle: bookmark this page or subscribe below to get our free release date alerts!

The Middle Season 9 released October 3, 2017. ABC has announced the cancellation of the series after nine seasons, the sitcom will not move forward into Season 10 in 2018 or beyond.

Entering its ninth and final season, two-time Emmy-winner Patricia Heaton stars in this warm and witty single-camera comedy about raising a family and lowering your expectations. Middle-aged, middle class and living in the middle of the country in Orson, Indiana, Frankie Heck is a harried wife and mother of three who uses her wry wit and sense of humor to get her family through each day intact. Frankie works as a dental assistant, and her unflappable husband, Mike, is manager at the local quarry and her sardonic partner in the daily grind that is raising their average – yes, most definitely average – family.

Between juggling shifts and picking up fast-food dinners eaten in front of the TV, Frankie and Mike raise their kids with love, humor and solid Midwestern practicality. Recent college graduate Axl, the oldest, returns home from his summer trip to Europe and takes on a new, chill European look on life. Although Mike is still on his back to get a job, Axl will do so, but at his own leisurely pace. Axl is still dating Lexie, and their relationship is getting serious enough that it’s time for Frankie and Mike to meet her rich parents, which makes them just a tad nervous. Then there’s the ever-optimistic Sue, their extraordinarily ordinary daughter, who fails at just about everything she tries with great gusto. She is excited to start her third year at college with roommate Lexie but is still trying to get used to the fact that Axl and Lexie are dating. And she still has the snow globe that she found in the trash – unaware that Sean Donahue was going to give it to her and profess his crush on her before a misunderstanding quashed the moment. Sue has unrequited feelings for him, too, but will they ever discover their mutual attraction for each other? And finally there’s Brick, their quirky son, who reads constantly, whispers and “whoops” to himself, as well as unapologetically marches to the beat of his own drummer. Now entering his sophomore year in high school, he thinks this will finally be his time to become more popular and decides to break up with his equally quirky girlfriend Cindy so that he’s not tied down. But, being a Heck, things probably won’t go quite as smoothly as he would like.

Frankie and Mike had hoped to continue finding themselves with an emptier nest, which, in theory, would have let them cut back on their parental duties. But with Axl now back at home along with Brick, they find that hope quickly fading. Parenting is never over no matter where your kids are. Balancing kids and work never really gets easier – it just gets different.

Their hilarious struggles continue, but through all the madness shines a loving family, and together the Hecks continue putting The Middle on the map.