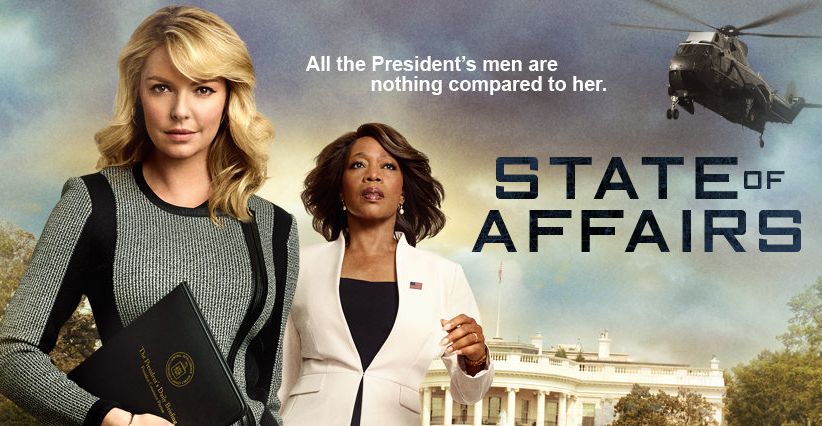 See the status box below for the most up to date return date info for Season 2 of State of Affairs:

State of Affairs Cancelled for Season 2 By NBC

Subscribe below to get our free release date alerts, bookmark or keep this page handy so you don’t miss the return of State of Affairs!

About State of Affairs

Each day the president is faced with dozens of life-and-death decisions, and to prioritize the biggest international crises facing the country, one top CIA analyst - Charleston Tucker (Katherine Heigl, "Grey's Anatomy") - assembles the President's Daily Briefing (PDB). This list of the most vital security issues facing the nation brings with it moral and political judgment calls for Charleston and her trusted group of brilliant analysts at the agency. Aside from the political minefields she has to walk, Charlie has a close personal relationship with President Constance Payton (Alfre Woodard, "Desperate Housewives") because she was once engaged to her son before a tragic terrorist attack took his life. Charlie survived that attack and is now determined to bring the perpetrators to justice. Navigating a complex personal life and a pressure-cooker profession is, of course, a challenge, and Charlie sometimes engages in boundary-pushing behavior to avoid facing her grief. But when the clock strikes 2 a.m., she is all about her job - protecting her nation, serving her president and still trying to get to the bottom of her fiancé's murder, which will reveal itself as a shocking mystery.