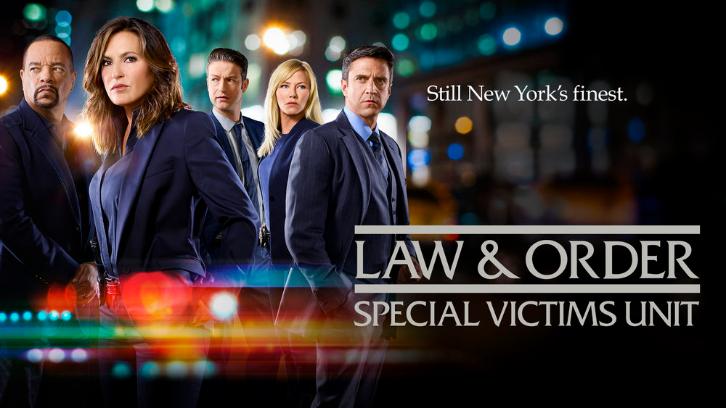 See the status box below for the most up to date return date info for Season 20 of Law & Order: SVU:

Don’t miss the release of Law & Order: SVU: bookmark this page or subscribe below to get our free release date alerts!

Created by Emmy Award-winning producer Dick Wolf, "Law & Order: Special Victims Unit," now in its 18th season, is the longest-running primetime drama currently on television. This hard-hitting and emotional series from NBC's "Law & Order" brand chronicles the life and crimes of the Special Victims Unit of the New York City Police Department, an elite squad of detectives who investigate sexually based crimes.

As acting commander of the SVU, Sergeant Olivia Benson (Mariska Hargitay) is a seasoned veteran of the unit who has seen it all. She leads with empathy and professionalism, all the while dealing with her difficult past as a product of rape, and her future as mother to a young child, both of which influence the way she relates to each victim in need of help.

Detective Odafin "Fin" Tutuola (Ice T) adds a unique sense of humor and undercover investigative experience, making him a formidable match for any partner. Detective Amanda Rollins (Kelli Giddish) has earned her place as an integral part of the team while facing head-on the emotional toll it takes to work SVU, and Detective Dominick "Sonny" Carisi (Peter Scanavino) brings a fresh outlook and distinctive style of investigation to the squad. Assistant District Attorney Rafael Barba (Raúl Esparza) seeks justice for SVU's victims and survivors with precision and a passion to win.